This is our 3rd and final members ante-post selection and it goes to post in the blue riband race on the final day of the 2020 Cheltenham Festival... The Cheltenham The Gold Cup

Race analysis:
Last year’s winner Al Boum Photo has a really good chance of retaining his trophy; however, we have seen how hard it is to have back to back wins in this blue riband race. He has only had the one run this season winning a Grade 3 at Tramore on New Year’s Day. Willie Mullins is an undoubted master but this may even be a bridge too far for him!

Santini won on his last run at Cheltenham in the Cotswold Chase at Grade 2 level. He has run well at the Festival in the last two seasons over fences in last year’s RSA finishing second to Topofthegame (in front of Delta Work in 3rd) and third the previous year in the Alfred Bartlett. He should stay, but his price is too skinny for a horse with limited experience – he’as had only 9 career runs under rules due to an injury-hit career.

Kemboy remains an enigma to some extent having put up a superb performance to beat Al Boum Photo at Punchestown in April. He has since been caught up in the collapse of Supreme Racing and also had a bit of an interrupted preparation with weeks on the sidelines. Kemboy has since run twice being beaten twice by Delta Work both times and that one is three points shorter in the betting as a result. I do think Kemboy has the talent to win the Gold Cup if he truly stays, but I remain unconvinced about his jumping under pressure.

Like all Gold Cups there are a multitude of other challengers with previous winner Native River, Delta Work, Presenting Percy and Lostintranslation all having the talent to win this.

Clan Des Obeaux has been described by many as a non-stayer but he finished fifth in this race last year as a seven-year-old and I actually think he would have gone closer but for Paul Nicholls running him at Ascot less than a month before the race. I think that may have just put him over the top and this year not having raced since impressively winning his second King George on Boxing Day by 21 lengths should see him cherry-ripe for this. I think he has such a high cruising speed that he can go around in third gear before accelerating coming down the hill. His price looks generous to me and I am looking forward to this race more than any other at the Festival at this stage. 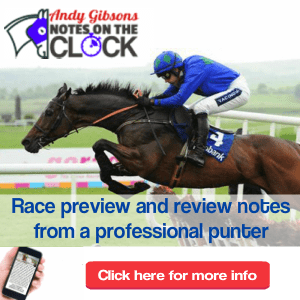