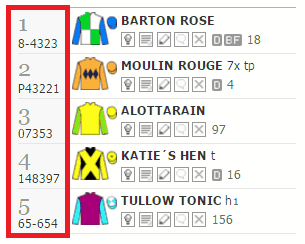 Ever asked yourself "what do the form numbers mean in horse racing?" When first faced with a betting card, most people have wondered what this series of numbers represents. Form study is the key to making a gamble that will pay off, so here, we're going to explain how to decipher form numbers.

Even the most committed gambling pro would struggle to keep up with every race that takes place in the UK every year. This is where form numbers come in: they give you lots of valuable information about a horse's performance, albeit in a bit of a cryptic format.

What do the form numbers mean in horse racing?

So, what do the form numbers mean in horse racing? To the left of the horse's name, you'll find a series of figures, which is the form number. If you read the numbers from right to left, you can find out where the horse finished in its races, with the number on the far right being the most recent result.

If the form guide says 5347583, that means the horse finished third in its most recent race, 8th in the race before that, fifth before that, and so on. Seems simple, but there are some other abbreviations you need to watch out for:

- A zero shows that the horse didn't finish in the final nine.
- A dash (–) indicates separate racing seasons – they'll use this if the season has only recently begun, or if the horse missed a few races for whatever reason.
- A slash (/) indicates the horse took a longer break, say if they missed an entire season due to injury.

Another thing to look out for is any bold numbers, which indicate the type of course. If you're looking at a flat form, a bold number means that race was on an all-weather track. Equally, bolding on a jumps card means it was a point-to-point course.

In the columns to the left of the horse's name there will also be some numbers. Although generally more relevant to jump racing, these letters also give you lots of valuable information. Here's what they all mean:

Other information to look out for

Aside from the form number, there's also more handy information about your horse in the second column, alongside its name and the jockey's silks. The number shows how many days it was since the horse last ran and the letters show some further information about their performance:

There you have it – if you were asking yourself "what do the form numbers mean in horse racing?" hopefully now you have a better understanding. With your new-found form number knowledge, you can start to make smarter bets alongside that all-important intuition that often leads to a winning ticket.

Remember, although the information contained in the form number is valuable, form study isn't an exact science. After all, horses aren't robots; just like people, they have their good days and their bad days. Of course, it's this element of unpredictability that makes betting on horses so exciting.

Related links:
How are bets calculated
can you make money from horse racing
what is the best bet to place in horse racing?