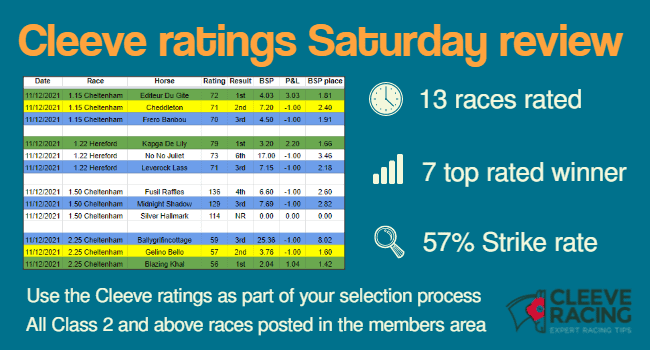 we have been asked by several of our new members if there are any hard and fast rules for using the Cleeve Ratings.

The short answer is no...

The ratings are there to be used as a guide to help you narrow the field down and you should always be looking beyond the bare ratings.

There are certain races that you shouldn't really be playing in unless you have a strong personal opinion; these would include juvenile and novice races which have limited form to go on and are therfore harder to rate accurately.

We do publish the ratings to our members for EVERY Class 2+ race, but in our experience, some types of race are to be approached with a hefty level of caution.

Sometimes it's easy to eliminate certain horses even when they are in the 3 top-rated. It could be that they have the form in the book but are coming off a lengthy absence, or the yard may be stone cold. Cleeve's ratings are a good starting point for your selections and should really help you pick more winners.

Below we have summarised the ratings performance from Saturday which was a busy day with 13 Class 2+ races, we've looked at each race individually and tried to give you some pointers on which races we felt it was better to leave alone...

As you can see the ratings stack up on their own but with a little bit more analysis you can quickly improve on these results.

You can see all the results for this year here

1.05 Cheltenham - JCB Triumph Trial Juvenile Hurdle
A juvenile race with limited form to go on. This is probably not the kind of race you should be playing in but using as a watching brief for later in the season

12.40 Cheltenham - bearrene.com Novice Chase.
The winner My Drogo was top-rated but was long odds on and so again this was not a good a race to be playing in our opinion.

1.15 Cheltenham - Simon Claisse Handicap Chase
Top Rated
Editeur Du Gite - 1st
Cheddleton - 2nd
Frero Banbou - 3rd
Our top 3 were closely rated and came out 1st ,2nd and 3rd. Editeur Du Gite progressed again keeping ahead of the handicapper and won impressively by 4 lengths. It will be interesting to see where they go with him later in the season, maybe the Grand Annual or Red Rum?

1.22 Hereford - Royal Equestrian Bedding Mares Handicap Chase
Top Rated
Kapga de Lilly - 1st
No No Juliet - 6th
Loverlock Lass - 3rd
Kapga de Lilly made easy work of this after going up a whopping 24lbs from the mark that she won this race last year. She was giving weight away all round but won easily by 9 lengths. Both Loverlock Lost and No No Juliet looked out of their depth here.

1.50 Cheltenham - Racing Post Gold Cup Handicap Chase
Top Rated
Fusil Raffles - 4th
Midnight Shadow - 3rd
Silver Hallmark - NR
A fascinating rematch between Cool Cody and Midnight Shadow who were fighting it out in the Paddy Power when Cool Cody fell at the last. Cool Cody was receiving an extra 5lbs this time round and it was Midnight Shadow's turn to make a mistake 2 out which may have cost him the race. Fusil Raffles ran a game race in 4th considering he made a couple of really bad jumping errors, especially at the 10th,he ran on strongly and with a clear round of jumping would surely have been a lot closer. He's only a 6-year-old and if Nicky Henderson can get his jumping right he will win good races in the future.

1.57 Hereford - Cazoo Handicap Hurdle (GBB Race)
Top Rated
Orchard Grove - 7th
Carys Commodity - 8th
Ch'tibello - 4th
This is a typical example of a race where looking beyond the bare ratings would have steered you clear of any of the top-rated.

Orchard Grove was stepping up to a much higher grade and looked out of his depth. Carys Community has had 2 wind operations and been tried chasing but here was reverting to hurdles. Ch'tibello was ridden by an amateur (which raises a few alarm bells in a Class 2 handicap) to take some weight off. He had not won since March 2019 and looks to need further nowadays.

3.00 Cheltenham - Unibet International Hurdle
Top Rated
Sceau Royal - 6th
Song For Someone - 2nd
Guard Your Dreams - 1st
The ratings nearly got this spot on. Guard Your Dreams hung on gamely on the run in from Song For Someone prevailing by half a length. Sceau Royal was disappointing but this was his 4th race in less than 2 months so I think he could well be back on song after a break.

3.35 Cheltenham - Close Brothers Mares' Handicap Hurdle
Top Rated
Indefatigable - 2nd
Martello Sky - 1st
Wynn House - 4th
Another competitive race with the ratings again nearly giving the first 3 home. Martello Sky resumed her progress back against the mares and found extra on the run in to hold off Idefatigable by half a length. The race wasn't run to suit Wynn House who probably needs a quicker pace and couldn't quicken from 2 out but stayed on well to get 4th.

12.55 Doncaster - bet365 December Novices' Chase
Top Rated
Threeunderthrufive - 1st
Emitom - 3rd
Fantastikas - 2nd
A disappointing turnout for a Grade 2 Novice Chase with just 3 runners and a long-odds shot winner in Threeunderthrufive, Definitely not the type of race to get involved with.

2.05 Doncaster - bet365 Handicap Hurdle
Top Rated
Tommy's Oscar - 1st
Take It Easy - 4th
Rockadenn - 7th
Tommy's Oscar continued his improvement and a great advert for a small stable. Don't think it will be long before he is stepped up to graded company. Take It Easy was hampered 2 out but even with a clear run, I don't think he would have troubled the winner. Rockadenn was easy to avoid having his first run for 7 months after leaving Paul Nichols yard. May come on for the run but needs to improve his jumping in my eyes.

2.40 Doncaster - bet365 Summit Juvenile Hurdle (Grade 2)
Top Rated
Knight Salute - 1st
Porticello - 2nd
Too Friendly - 4th
A Juvenile Hurdle race and even though the ratings gave the 1st and 2nd, probably not a race to get involved in at this stage of the season. Knight Salute maintained his unbeaten run but the race wasn't run to suit Porticello who may need more of a test of stamina.

3.15 Doncaster - bet365 Handicap Chase
Top Rated
Two for Gold - 1st
Kauto Riko - 2nd
Fidux - 5th
The ratings gave 1st and 2nd in what was a poor renewal with two  10-year-old veterans filling the places. Two for Gold didn't have to improve much to win this after a 247 day lay-off.

As I've said, in the next post in this series we will look at how the Cleeve Ratings software performs when it's applied to lower class races and see if it is still as profitable.