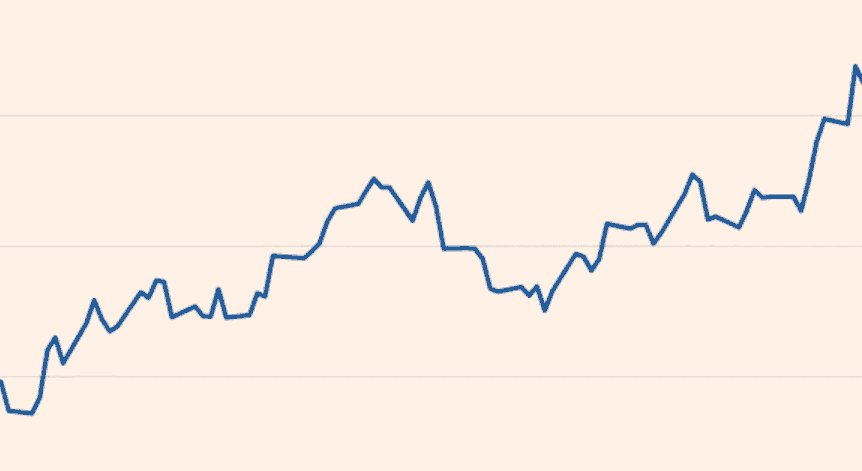 It's probably the hardest week's punting in the calendar year... maximum fields, devilishly hard handicaps, unrelated form lines, unexposed novices... you get the picture! Almost all the novice form going into the Festival is in small, fairly uncompetitive fields where highly touted horses go off at long odds on and are mostly able to dominate races... this is a completely different ball game with an unrelenting pace from the tapes going up, the course is an extreme test and the atmosphere will be like nothing they've seen before... and some of them just won't handle it. This is probably why previous Festival form is such a strong positive factor.

It's been a similar trend with our ability to dig out a decent profit out for members is similarly. We approach the Festival with some trepidation as we'll stake around a month's points in 4 days so the week has a huge impact on our season... which can be good or it can be bad.

So we work double hard and use a strategy that we've developed that is purely based on Festival experience... the races to bet in, the races to avoid, how to play the handicaps, which are the trends to focus in on and which are the ones to ignore.

Here's a summary of how the last 5 years have gone for us... 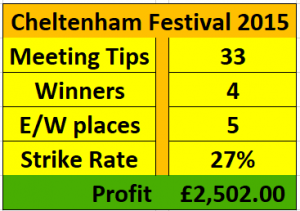 This was a quite amazing week for us and one we won't claim in any way to be normal... but our members were happy to take it! We backed the Gold Cup winner Coneygree antepost at 33/1 and went back in on the day at 10/1. Cole Harden in the Stayers was a similar story... 33/1 antepost and 18/1 on the day. We also had that warrior Wicklow Brave (who is very sadly no longer with us)  who turned a competitive-looking  County Hurdle into a procession at 33/1. 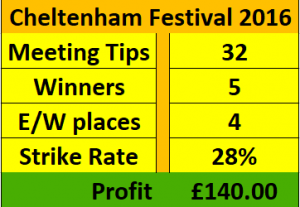 The following year and back to normality! We had a great starting with our first bet Altior taking the Supreme Novices at 6/1 and The Young Master then placing at 16/1 in the Ultima, but then it was downhill all the way with our next 15 tips all failing to trouble the judge and we were facing a double-figure loss halfway through the 3rd day. We then hit our stride again with 3 winners and 3 places from our last 17 selection to snatch victory from the jaws of defeat and post a profit 0n the week. 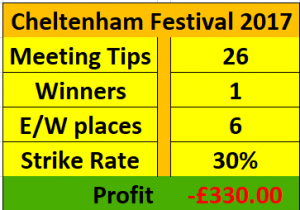 Well, you can't win them all... we came very close and hit the bar at least 3 times with selections being narrowly beaten by a head (twice) and a neck which would have changed a losing week into a winning one. But you have to be prepared to take your lumps in this game as losing is part and parcel of punting. If you average a strike rate of 30%+ and back winners at an average Sp of around 10/1 you'll make a handsome profit from your betting... but 2 out of every 3 bets you have will lose. It's all about the bigger picture.

Normal service was resumed in 2018 and we had a very satisfactory Cheltenham Festival indeed. We achieved an above-average strike rate with our tips of 42% which is very impressive indeed. We were in front fro the very first race and never looked back. Our best winner was Bleu Berry at 33/1 in the Coral Cup who grimly hung on up the hill in a protracted battle with last years RSA winner Topofthegame. 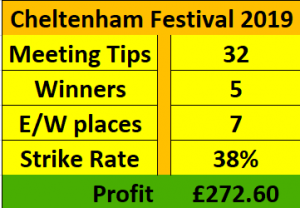 Last year was quite frustrating inasmuch as we were around 20 points up after a cracking first 3 days averaging a strike rate of over 40%, but we had a disappointing last day with no winners and just 2 third places from 8 selections and ended up giving over a third of our profits back. 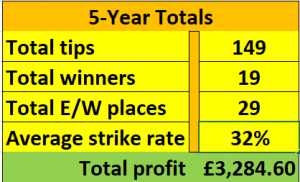 Looking back on all this to research this write up, I feel quite proud of what we have achieved! As I said at the start it is the toughest weeks punting of the year and a week we approach with some trepidation. Yet we have made a decent profit in 4 of the 5 years, a big profit over the whole 5 years at an average strike rate of 32%. I hope I am feeling as positive when I am updating this next year, but on the evidence of what you've just read there's' an 80% chance that I will be...

Take a look in our Trophy Cabinet

Profitable punting
The team at Cleeve