It's a bit later than promised, but here is the 'warts and all' review of how every selection that we had fared at the Festival. It certainly felt painful, and it cost us money. With everything now so 'Cheltenham-centric' it can feel that a bad festival equals a bad season. Four days is much too short too accurately judge a service, anyone can be lucky/unlucky in that time... it's a bit like trying to forecast the English weather based on 4 days of sunshine...

Back to the Festival and I know that we mentioned several times how the Betting Gods were not on our side and luck just wasn't with us, and looking at the results in detail certainly bears that out...

We started off quite well on day one with a place and a winner from our 5 selections, although Jer's Girl was a faller, we're doubtful she would have got into contention for a place given how the race panned out. So we were happy to end the day 6.75 points in front, which we hoped would give us a solid base to move forward on day 2. 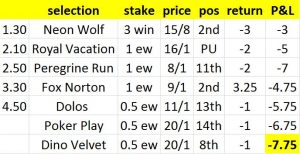 Day 2 was the day that almost was. We started off with our biggest bet of the meeting; 3 points win on Neon Wolf and there is no doubt in  our minds that if he had jumped the last cleanly he would have won, however he didn't and we were 3 points down. Fox Norton also just failed to get up in a photo to beat Special Tiara in the Champion Chase, so what could have been 15 points profit in the bank, ended up as a loss of 7.75  points... still we were only a point down on the meeting at the mid-point with all to play for.

On day 3 we again finished just in the red, with a couple of double figure placed horses and both Ballymalin and Cole Harden finishing one place of the frame. I suppose it was a pretty fair effort on a difficult day and still left us a chance to get our noses in front on the final day, as this put us just 2 points down after 3 days.

Friday was certainly to be our Waterloo as far as the week was concerned. Baupaume got us off to a fair start, but a run of The World's End who fell when travelling powerfully, Native River who we had to win rather than place, Wonderful Charm who came with a rattling run but just failed to get up, and Rather Be who was unluckily brought down at the second, and our goose was well and truly cooked. I hoped against hope that the well backed Le Prezien (advised 6/1, SP 7/2) would pull us out of the fire but no surprise it was not to be.

We finished the meeting 10.75 points adrift, but looking at it in detail I can't help feeling that we didn't do a hell of a lot wrong.

40% of our selections finished in the frame which we would have happily settled for before the tapes went up on Tuesday, the problem was that we only had one winner. Saying that we had 3 horses beaten in photos by two heads and a neck respectively, and if those had gone the other way it would have left us 14.25 point up on the week.

We are not in the habit of blaming luck for everything, more a case of showing that this is a game of small margins. What we are trying to emphasize is that our process was not far off. We are in touch with most of he better respected services around and can tell you that no one we have spoken to came out on top for the meeting, which underlines what a tricky festival it was.

Members who have been with us for a while will know that we have never failed to deliver over the long run, it is harder for new members to maintain confidence. So I'll finish with a quote from an email we got on Friday evening.... "A tough week at the office lads and I'm sure you'll be feeling a bit down in the dumps. It could have been a lot worse, but as a long standing member I know this is just a blip.... remember form is temporary but class is permanent so keep your chins up!"...

Thanks Alan, we really appreciate it.